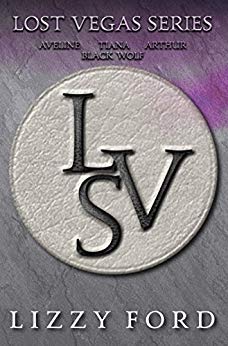 In post-apocalyptic America, five hundred years in the future, famine, war, and chaos have created a hell on earth. Outside the isolated city of Lost Vegas, violent skirmishes among the Native Americans – who have retaken their ancestral lands – claim lives by day, while ancient predators awakened during the Age of Darkness hunt humans by night. Inside the city, criminals, the impoverished, and the deformed are burned at the stake weekly.

However, for a handful of unlikely allies – a scared girl, an assassin-in-training, a skinwalker, a displaced heir, a Native seeking vengeance – all roads, and all paths, lead to the cursed city and the war brewing around it.

Among those ruthless enough to survive is seventeen-year-old Aveline, a street rat skilled in fighting whose father runs the criminal underworld. On the night of her father’s unexpected death, a stranger offers to pay off her father’s debts, if she agrees to become the guardian of Tiana Hanover, the daughter of the most powerful man in Lost Vegas. Caught between her father’s debtors and his enemies, Aveline reluctantly accepts.

Tiana Hanover, the sheltered daughter of Lost Vegas’ leader, has spent her life hidden away from everyone. She’s deformed, like the people her father routinely burns at the stake. Her only friends are her brother and her new guardian, Aveline, neither of whom understand the depths of her forbidden magic. Leaving Lost Vegas gives her the first taste of freedom she has ever known – and sets in motion forces she could not have foreseen.

As the presumed heir to Lost Vegas, Arthur has purposely ignored the depravity with which his father runs the city with the excuse he will change things once he is in charge. With his loyalties in question, Arthur struggles to balance protecting those he cares about and surviving long enough to save his city, a challenge that grows harder when the Natives around Lost Vegas begin to ally with one another. War is looming – but the visions Arthur has of the future show him a worse fate is possible.

Caught up in the Hanover family drama, the solitary Black Wolf is forced to accept allies to assure the outcome everyone wants. But even he is uncertain of how anyone – especially a scared girl, a half-skinwalker, a displaced heir, and a Native seeking vengeance – will defeat a man whose power and reputation for cruelty are spoken of in whispers for thousands of miles.

The skinwalker’s fate and death may be predetermined, but little does he know the importance of his role in the final battle.